Early explorers to the west coast of North America were looking for the terminus of the Northwest Passage. This mythical route was believed to connect the Atlantic to the Pacific and provide a shorter European trade route to China.

In the 1770s it was rumoured that the Russians, already known to be in Alaska, were establishing fur-trading posts down the west coast. During Cook's fatal third voyage (1776-1780) he was instructed to look for the western entrance to the Northwest Passage in the Bering Sea and to report on Russian activity in the area. . 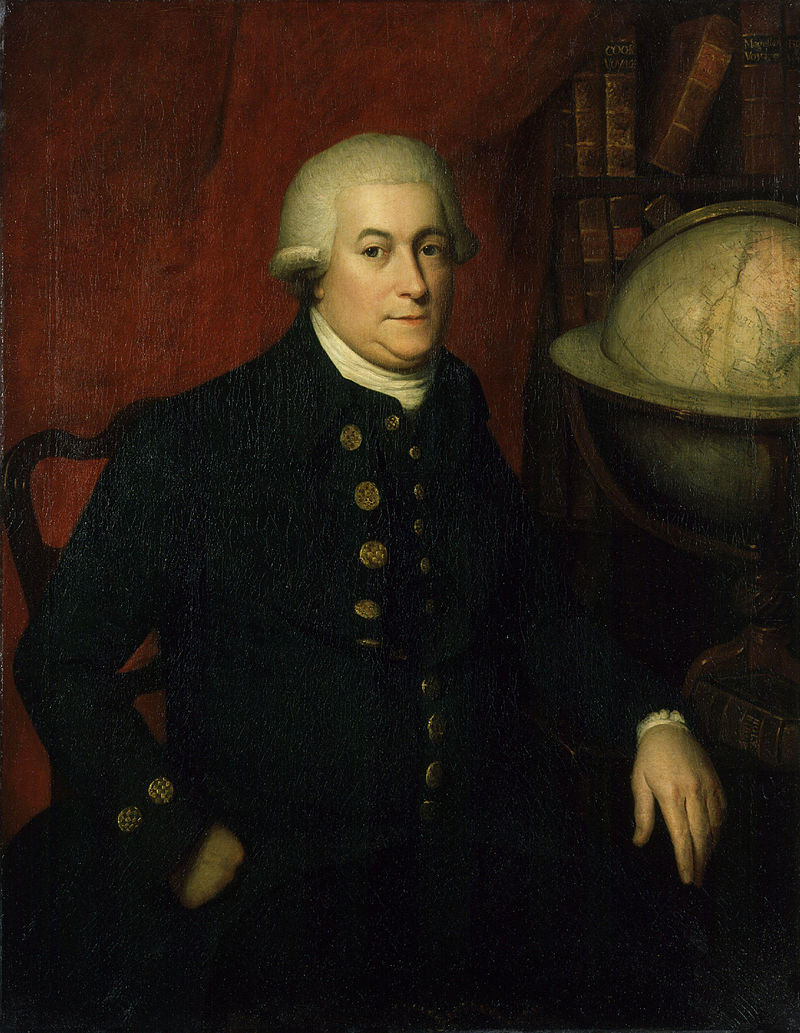 In the early 1790s the British sent another expedition to the Pacific under the leadership of Captain George Vancouver (1757-1798). Vancouver was a very experienced seaman. He had extensive experience in the West Indies and served on Cook's second and third voyages

With the rank of lieutenant, Vancouver was originally chosen as second in command to Captain Henry Roberts. When the voyage was delayed because of possible hostility with Spain over the small naval station at Nootka on Vancouver Island, Roberts was re-assigned. Vancouver was put in command and promoted to Captain.

Vancouver sailed from Falmouth, England on April 1, 1791. The expedition consisted of two ships, Discovery and Chatham. Vancouver arrived off the coast of California on April 17, 1792 after sailing via Cape of Good Hope, southwestern Australia, New Zealand and Tahiti.

Among his many tasks in this long expedition (1791-1795), Vancouver's Pacific northwest orders were to seek out the western end of the northwest passage, generally thought at the time to be a navigable river somewhere along the Pacific coast, chart the coast between Latitudes 30 and 60 degrees north, and to negotiate an agreement with the Spanish over the conflicting land claims at Nootka.

Accompanying the expedition were Lieutenant William Broughton, Captain of the Chatham, Surgeon Dr. A. P. Cranstoun, and Surgeon-naturalist, Dr. Archibald Menzies (1754-1842) who was primarily a botanist.

Keir Sterling wrote an extensive biography of Menzies, which included an important bibliography, in the Biographical Dictionary of American and Canadian Naturalists and Environmentalists. Menzies came from a family in which four of his brothers were gardeners. Following in their footsteps he worked for a time at the Royal Botanical Garden in Edinburgh. Menzies was encouraged to study as an apothecary and surgeon by the Director of the Garden, Professor John Hope.

On completion of his training he joined the Royal Navy as a surgeon. Menzies served for twenty-four years including a posting to Halifax, Nova Scotia, in 1784. During his residence there Menzies collected plants for Sir Joseph Banks. Menzies future career as a naturalist and botanist was closely tied to his association with Banks. During his Halifax posting, the surviving documents reveal very little evidence that Menzies interest's extended beyond botany. For further details see the Menzies paper under 18th Century Nova Scotia.

Menzies was assigned to the Vancouver expedition on the recommendation of Sir Joseph Banks. This was Menzies second visit to the area. He had previously served as surgeon on the Prince of Wales, a fur-trading vessel commanded by James Colnett which visited Nootka and China (1786-1789). Menzies position on the Colnett voyage was also secured for him by Banks.

On his first visit with Colnett it is understood that Menzies spent a month collecting botanical specimens at Nootka, presumably for Banks. The meagre evidence available reaffirms that Menzies' primary interest was botany rather than zoology. Banks collected zoological specimens extensively during his famous expedition to Newfoundland and Labrador in 1766.This concentration on botany may reflect a change in Banks's collecting interests. Perhaps over the twenty intervening years, with all the avifauna material coming from Hudson's Bay, and recent material obtained from the third Cook expedition, Banks had concluded that collecting Canadian ornithological specimens on the west coast was less likely to produce new species. On the other hand Menzies concentration on botany may have been nothing more than a desire to fulfill the wishes of his patron.

Wherever possible on the Vancouver Expedition Menzies did collect zoological material. This proved to be difficult when the ship's doctor, Dr.Cranstoun, died and Menzies assumed the dual role of doctor and naturalist. Layland, in his important book In Nature's Realm Early Naturalists Explore Vancouver Island, notes that Menzies allegiance to Banks and the placement of a plant hutch on the deck, which Vancouver viewed as an impediment, created tension between the two men. Sterling notes that their personalities also clashed: "Menzies relations with Vancouver were often severely strained, as Vancouver was something of a martinet".

Vancouver reached the Strait of Juan de Fuca in May, 1792. After surveying this area he explored Puget Sound where he made extensive surveys. This area is named after Lieutenant Peter Puget of the Discovery. They crossed the 49th parallel on June 12th charting the coast in small boats and entered Vancouver Harbour on June 13th.

Sailing north Vancouver discovered that Vancouver Island was actually separated from the mainland, and that the body of water they were sailing in did not lead to a northwest passage. In the area of Point Grey and Burrard Inlet Vancouver met with Spanish explorers Valdes and Galiano. They proceeded together northward as far as Queen Charlotte Sound. Vancouver sailed north along the coast to Latitude 52N in northern B.C. On August 18th the expedition turned south to Nootka where they remained until October.

Vancouver visited Nootka to negotiate with Quadra, the Spanish representative. Spanish and British traders had been operating from the area in the 1770s and 1780s and in 1789 Esteban Martinez had established a small trading fort there. No agreement was reached.

In October, 1792, following the discovery of the Columbia River by the American, Captain Robert Gray, Vancouver sent Lieutenant Broughton to the Columbia. Broughton entered the estuary, sailed 100 miles up the river and claimed the area for George III.

Broughton's Journal provided the first descriptions of the natives, the plants and the animals in the lower Columbia River watershed of Oregon. Vancouver also visited the coast of California where Menzies, one of the first naturalists to visit the area, collected a number of new species including the California Condor and the California Quail.

Wintering in Hawaii, the expedition returned to the Nootka area in May, 1793. Sailing north, they charted the coast and Haida Gwaii (Queen Charlotte Islands) and visited the Bella Coola area in late May. Two months later, on July 20th, Alexander Mackenzie and Alexander Mackay descended the Bella Coola reaching the Pacific after their epic trip across the Rockies. They were the first white men to reach the Pacific by traversing North America.

Vancouver sailed north reaching the mouth of the Skeena in early July, 1793, and the border with Alaska about the first of August. The most northerly point reached was near Wrangell, Alaska. The ships headed south, reached Nootka in early October, 1793, then continued south to California before sailing for Hawaii.

Vancouver returned again to the Pacific northwest in the spring of 1794 arriving at Cook Inlet, Alaska, in mid-April, 1794. His earlier explorations had convinced him that there was no river along the coast to the south which might afford a connection to the Atlantic. Cook Inlet also provided no egress point, a western exit to the Northwest Passage.

Vancouver proceeded north charting the coast where he encountered Russian fur traders. In late August, 1794 he sailed south to Nootka, arriving in early September 1st. He departed for California on October 6, 1794. The expedition left California in December sailed around Cape Horn. They reached Ireland in September, 1795.

The results of British Explorations on the west coast and Mackenzie's trek to the Pacific encouraged the Northwest Company to send Simon Fraser across the Rockies to set up trading posts for furs on the Columbia. (Morewood. Pps 51-54).

Ornithological Results of the expedition

The considerable botanical material, which was collected and survived, affirms that Menzies continued to peruse his primary interest in plants. As noted in Stern's biography on Menzies in the Dictionary of Canadian Biography Volume VII (1836-1850):

Menzies collection was sent to Kew Gardens. Some of the well-known plants discovered by Menzies were Douglas Fir and Trailing Arbutus.

Menzies Journal of his voyage up the Pacific coast to near the Alaska border, Menzies' Journal of Vancouver's Voyage. April to October, 1792 was edited by C. F. Newcombe and published in 1923. Bird observations found in the Journal are few. They are noted below:

p. 46 Sea Pies shot June 23, 1792 Smith's Island, Howe Sound "About the Rocks were a number of Black Sea-pies of which we shot several & found them good eating"

p. 46 Mr Whidbey had gone up the coast to Strawberry Bay where he met some aboriginals "who had nothing to dispose of but a few Water Fowls particularly a blackish coloured species of Auk with a hornlike excrescence rising from the ridge of its bill & it appeared to be a new species I named it Alca Rhinoceros & described it"

p. 51 June 8, 1792 rowing along the coast in the Strawberry Bay area, they landed on an island "where we shot a number of black sea-pies & carried them on board with us together with the young of a large Crane we got on another island which I took to be the Ardea Canadensis"

p. 75: July 2: a large grouse perched in a Pine tree near Redonda Island

The Menzies manuscript contains lists of mammals and birds collected and identified by their scientific names. The bird list is short, likely incomplete. There is little in the way of accompanying text. No locations, except the obvious Lanius Nootka [Northern Shrike].

The complete bird list, of about 30 species, arranged in AOU Checklist order, in MSS MEN: 5-7 is as follows:

Three descriptions of birds are also included in the Manuscript. Given the date of the first entry they may well have been made at Nootka. Complete details are presented below:

Bill is pale, darkish towards the tip – legs pale as well as the toes and claws – Neck, back, breast & belly & fore part of the wings are yellow – the fore head wing & tail are black – The tips of the greater coverts - the tips & exterior edges near the tip of the secondaries are white- The tail is a little forked, consists of twelve feathers. The inner side of each feather is tipped with a white spot – the inner feather after tail is slightly edged in white the coverts of the tail .... are white horn of a canary bird.

Ardea Canadensis is a bird of considerable size and much handsomer formed than the generality of this genus, [text somewhat hard to read appears to mention red on the head] of a light lead colour with a rufus tinge – the forepart of the head is naked and pepullous? With short bristly black hair. Under the chin is white – they inhabit inland dry fields & are seldom seen along the marshes or the sea shore – legs & claws black.

The results of Menzies avi-faunal collections are considerably less impressive than the results of the Cook expedition. As one of the first naturalists to visit California, Menzies is attributed as the collector of a number of new species including the California Condor and the California Quail which were described by George Shaw and John Latham.

In 1831 John Richardson published his Fauna Boreali Americana Volume II: The Birds. In his Introduction (xi) he reviewed the historical ornithological literature from the Northwest Pacific. He commented: "The voyages of Vancouver, Portlock, Meares, and Langsdorff, to the north-west coast, added little to Ornithology...."

Wayne Campbell in the introduction to his The Birds of British Columbia summed up the ornithological contribution of the Vancouver Expedition:

At this time it is unknown if there is additional artwork or manuscripts which might eventually be found to shed more light on the ornithological work of the Vancouver expedition.

The following is a list of bird and naturalists' illustrations found in Michael Layland's In Nature's Realm: Early Naturalists Explore Vancouver Island