Knowledge of the value of the Russian sea otter trade with China was greatly increased after the publication in 1784 of the third Cook's expedition to northwest America. This drew American, British, Spanish and French traders into the area and further attempts to look for the Northwest Passage. While the boom lasted, through the 1780s and 1790s, the flurry of activity opened up the Pacific Northwest for the first time.

In 1785 Louis XVI organized an around-the-world scientific expedition commanded by Jean Francois de Galaup de la Perouse (1741-1788). La Perouse was a highly experienced French naval officer. He had knowledge of Canada as the leader of the French naval attack on Hudson's Bay Company fur-trading forts at Churchill and York in 1782. During this encounter he captured the well-known explorer and naturalist, Samuel Hearne.

One of the purposes of this expedition was to seek out the Northwest Passage. 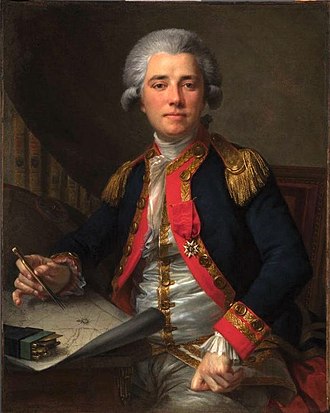 The Expedition had many objectives including a serious scientific element. As noted in Wikipedia:

Among his crew there were ten scientists: Joseph Lepaute Dagelet (1751–1788), an astronomer and mathematician, Robert de Lamanon; a geologist, La Martiniere,, a botanist; a physicist; three naturalists; and three illustrators, Gaspard Duche de Vancy, and an uncle and nephew named Prévost. Another of the scientists was Jean-Andre Mongez.

One of the naturalists known to accompany the expedition was Pere Laurent Receveur (1757-1788). An article on Receveur "An Eighteenth Century Conventional Franciscan Naturalist on the Laperouse Expedition: Pere Laurent Receveur (1757-1788)" was published 1993 in the Great Circle 15. In addition to his religious studies Receveur was known to have studied astronomy, botany, geology, chemistry, meteorology, entomology and philology. Laperouse Museum (Sydney, Australia) online: https://laperousemuseum.files.wordpress.com/2013/04/pere-receveur-final.pdf

La Perouse set out in two ships, L'Astrolabe and La Boussole, The expedition sailed via Cape Horn visited Australia and the Hawaiian Islands. La Perouse reached Yakutat on west coast of Alaska in June, 1786. In July and early August he explored the coast of Alaska.

In August he sailed south charting the coast of British Columbia, arriving in Monterrey, California in mid-September, 1786. Layland in his In Nature's Realm: Early Naturalists Explore Vancouver Island noted that off Nootka in the fog La Perouse noted in his Journal 1:160.

Given the time of year these birds may have been migrants from northern British Columbia or Alaska. There are far too many equivalents in France such as nuthatches, kinglets, thrushes, finches and sparrows etc to speculate on what specific species La Perouse might have been referring to.

Nautical charts drawn during the voyage, and sent back to Paris, reveal that Laperouse explored Haida Gwaii and Vancouver Island as far as Nootka during the month of August, 1786. (La Perouse: 1786 Chart of the B. C. Coast https://www.garylittle.ca/maps-historic/perouse.html)

Given French government interest in natural history, as demonstrated by the support for voyageur-naturalists, and support for the work of Baron Buffon and his 36 Volume Histoire Naturelle series (see articles under 18th century New France) it would seem likely that with an expedition of this scale ornithological material was collected. No attempt has been made to check whether any was sent on to Paris before the fatal voyage west to the Solomons.

While the results might have served as fresh material for the Musee Histoire Naturelle in Paris they could not have been published by Compte de Buffon who completed his 9-volume ornithological work, Histoire Naturelle des Oiseaux, started with Volume 1 in 1770 and completed in 1779.