The second Kamchatka Expedition (1733-1743) resulted in the discovery of the sea otter and the first scientific report on the fur seal. Not surprisingly the Russians started the marine mammal fur trade in the far east and Alaska as a result.

In 1784 Grigorii Shelikov established their first settlement in North America at Three Saints Bay, Kodiak. With Goriel Pribilof's discovery of the fur seals' breeding grounds, the combination of otter and seal pelts led to increasing exploitation of the region. This encouraged Catherine II to grant a monopoly to the Russian-American Company to exploit the resource. Initially stationed at Kodiak, the Russians expanded along the coast settling in the Sitka area in 1799. They built a fort called New Archangel, at what is now known as Sitka. They moved the Company headquarters there in 1804 and started trading south down the coast of British Columbia. 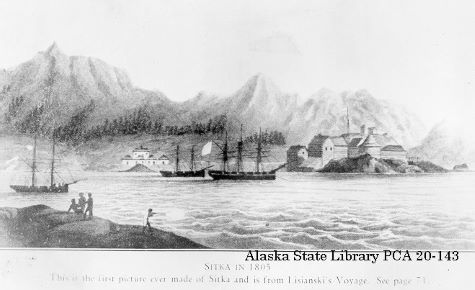 Knowledge of the value of the Russian fur trade was greatly increased after the publication in 1784 of the official report of the third Cook's expedition to northwest America. This stimulated other nations to send scientific explorations to examine the area's potential for furs, and to look for the Northwest Passage. La Perouse was dispatched by France in 1785. In the same year the Empress of Russia sent a scientific expedition to explore the coasts of eastern Siberia and northwest America. The expedition was also intended to strengthen Russia's claims to these lands and at the same time discourage European encroachment in the area.

Accompanying the expedition was the German naturalist, Dr. Carl Heinrich Merck (1761- 1799). Merck was born in Darmstat, Germany, into a family of physicians and pharmacists. Merck was related to the Merck family who in 1891 founded what was to become the pharmaceutical firm Merck-Frost. Merck followed in the family tradition by taking a medical degree. Noting Carl's interest in natural history, his influential uncle, Johann Merck, arranged for him to go to Russia to work with Peter Simon Pallas.

Erwin Stresemann wrote an extensive review of the ornithological findings of this expedition in Zoologische Jahrbucher. In his great work Ornithology; From Aristotle to the Present (p. 69) Stresemann was to conclude that Merck "was not well suited to the job, but he did his best to meet the expectations of his great model, Pallas, and he collected and described for him everything that seemed important......in that way many birds from the Far East reached Pallas".

Leaving St. Petersburg in the autumn of 1785, the expedition travelled overland through Siberia. They reached Okhotsk, on the coast of the Sea of Okhotsk, west of the Kamchatka Peninsula. There they built two vessels which they launched in August, 1789. The party wintered at Petropavlovsk, Kamchatka.

In May, 1790, the expedition sailed eastward past the Aleutian islands, landed at Unalaska, and then proceeded east to Kodiak, Afognak, Cook Inlet and Prince William Sound before returning to winter at Petropavlovsk.

On May, 1791 the ships returned, passed Bering island, touched at Tanaga, then proceeded to Unalaska. From Unalaska they sailed northward into the Bering sea, passed near the Pribilof islands and St. Matthew island, landed on St. Lawrence island, at Point Rodney, Seward peninsula. In early August they reached St. Lawrence Bay in the Bering strait.

Here Billings left the party for an overland journey in the Chukchi country. Billings's chief assistant, Sarichef, set out in mid-August for Unalaska, arriving August 28, 1791 where he spent the winter of 1791-1792.

In May, 1792, the party left Unalaska, returned to Petropavlovsk and thence made the long overland trek back to St. Petersburg.

Billings and Merck provided Pallas with the expedition's journals, maps and specimens. Along with Pallas' Siberian and Caucasian collections, they formed the nucleus of the Academy's holdings.

Stresemann was to note that the Billings Expedition collected "over 200 specimens of 120 species. Among these were 20 new [bird] species, mostly from Okhotsk, Kamchatka, Unalaska, Kodiak, and Prince William Sound." (Ornithology: 69). All 20 of these records are attributed to Pallas, including seven new species.

The Billings Expedition did not venture into British Columbia. As a result none of these species were first records for Canada.

Based on the Pallas's 1811 date of publishing of his Zoologia Rosso-Asiatica and official AOU Checklist data, Merck supplied specimens for the following seven species, new to science:

While the birds from the Billings Expedition were known, Merck's Journal was misplaced. It was eventually re-discovered, translated and published in English by Richard Pierce in 1980.

These two expeditions are discussed in separate papers under 19th century British Columbia.