The first important scientific exploration of the Pacific Northwest of North America was undertaken by Russia. In 1741 Georg Wilhelm Steller (1709-1746) landed on Kayak Island near present-day Valdez Alaska. While the Russian expedition did not enter British Columbia waters it led to further Russian voyages of exploration. Political and commercial interests in the area encouraged other European powers to send their own expeditions later in the 18th century. This led to the collection of the first ornithological specimens from British Columbia.

The prime motivator for Russian exploration in the far east was Peter the Great (1682-1725) who established the Academy of Sciences in St. Petersburg, about 1724. Like other western European academies, the Academy of Sciences was intended as both a research and an educational institution. Unlike others it was also charged with strengthening Russia and improving its geopolitical standing.

To ensure that the Academy would achieve the highest contemporary standards, Peter turned to Europe. He hired prominent scientists in mathematics, physics (which at the time included physics, anatomy, chemistry and botany) and the humanities. Some early foreign scholars included Swiss Polymaths Leonard Euler and John and Daniel Bernouli. (Florinsky: 387).

In 1725 Peter sent the Dane, Vitus Bering, on his famous expedition, conducted between1727 and1729, to explore the remote Kamchatka region and report on its potential. This was followed by Bering’s second Kamchatka Expedition (1740-1741). This featured prominent scientists, the first of a long series of German naturalists, George Steller and Johann Georg Gmelin (1709-1755). Gmelin, primarily a botanist, was the uncle of the famous German ornithologist, Johann Friedrich Gmelin, and a son of Johann Georg Gmelin, an apothecary in Tubingen. Johann Georg was the founder of the family of distinguished German scientists.

George Wilhelm Steller was born in Windsheim, Germany, and studied at the University of Wittenberg. Steller went to Russia where he found work as a naturalist with the Academy of Sciences. He was appointed naturalist on Vitus Bering’s Second Expedition to the Russian far-east.

Steller became the first white man known to have stepped upon land that eventually became known as Alaska. On July 20, 1741 he saw a new jay, subsequently named after him, on Kayak Island near present-day Valdez. Steller was familiar enough with the ornithological literature to recognize his jay as a North American jay because of its similarity to the Blue Jay. The latter had been recently described and illustrated by Mark Catesby in his Natural History of Carolina (Mearns: 409).

On Kayak Steller collected botanical specimens. In addition to the Steller’s Jay, his assistant Thoma Lepikhin “brought him a dozen different kinds of birds. On examining the corpses Steller found only two that were familiar to him – the Black-billed Magpie and the Raven.” (Mearns: 409)

Steller spent August 30 and 31 on Nagai Island, one of a group of islands in the Shumagin Island complex off mainland Alaska. The complex is at the eastern end of the Aleutian chain which stretches across the Bering Sea towards Kamchatka. See the map below. On Nagai Steller noted various birds “cormorants, auks, snipes” etc. (Gabrielson: 3). Gabrielson attempts to identify some of these birds, perhaps the most likely were Willow Ptarmigan, Pigeon Guillemot, Horned Puffin and Snow Bunting. Gabrielson also speculated on the identity of other species noted by Steller along the coast. Since Alaska is outside the immediate interest of Canadian ornithology these birds are merely mentioned in passing.

Steller only spent three days in North America. In that brief visit he is credited with a number of first descriptions of plants and animals that were new to Europe.

En route back to Kamchatka, Bering’s ship wrecked on a bleak island, and in a sea that both bear his name. There Bering and most of his crew died. Steller was among the few who survived the Arctic winter, escaping in spring on a ship built from the wreckage of their original craft. In the circumstances it is not surprising that Steller was able to salvage only a small number of botanical and zoological specimens. On Bering Island Steller encountered and described the Steller’s sea cow. Although skeletal pieces turned up for the next 100 years, no other naturalist saw this four-ton mammal alive. Another species Steller also found was the Steller’s Eider and the Spectacled Cormorant, largely flightless and fearless, soon doomed to extinction. 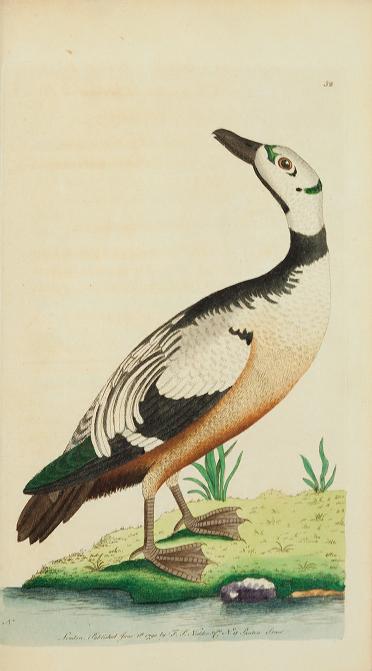 The Mearns's in their biography of Steller in Audubon to Xantus. The Lives of Those Commemorated in North American Bird Names noted that when Pallas arrived at St. Petersburg in 1769 he found the skin of an eider, collected by Steller, which he named Anas Stelleri after Steller. He also “found that many of Steller’s other bird skins had survived, and from these he added the original descriptions of Tufted Puffin, Parakeet Auklet, Crested Auklet and Steller’s Albatross Short-tailed.” (Mearns: 412). These species, all to be later found in North America, were likely collected in the Russian side of the Bering Sea. It is thought that Steller’s Sea-Eagle, described by Pallas in 1811 with field notes from Steller, was collected at Kamchatka.

In the final four years of his life Steller explored and collected plants and animals in Siberia. Steller headed back to St. Petersburg, intent on writing and publishing his findings. He ran afoul of the czarist bureaucracy and was arrested en route, imprisoned, tried, and finally released. Continuing on his journey he was arrested again on the original charges because local officials had not yet gotten word of his reprieve. By the time he was freed a second time, his health was broken. Fatally ill, Steller never reached St. Petersburg, dying at the age of 37.

Few of the plants and animals Steller collected in Siberia were received in St. Petersburg. His journals reached the Academy and were published after his death. On the strength of his detailed and painstakingly accurate journals, the Steller’s Jay was first described by English naturalist, John Latham, in 1781. By that time the British had an actual bird skin taken from Nootka Sound, Vancouver Island, by the Cook expedition. Since Latham did not use Linnean nomenclature, it was first officially described using /scientific names by J. F. Gmelin from Latham’s description of the Cook specimen.

Steller himself almost disappeared from the historical record until Leonhard Stejneger, a Norwegian-American naturalist, went to Alaska in the late 19th Century in search of Steller’s sea cow. He did not find the mammal but his trip kindled a life-long fascination with Steller. Over the next five decades Stejneger retraced Steller’s steps, explored his life and discovered his long-lost papers in Saint Petersburg, He published the only biography of Steller in 1936. The Mearns had high praise for the Stejneger biography describing it as “written for naturalists, about a naturalist, by a naturalist” (Mearns: 414)

The second Kamchatka Expedition resulted in the discovery of the sea otter and the first scientific report on the fur seal. Not surprisingly the Russians started trading for sea otters in the Kamchatka area after 1743. Soon after they were regularly crossing to the Aleutian Islands and Alaska to trade with aboriginal peoples.

Peter the Great was succeeded by his daughter Elizabeth and then by her son, Peter III. They continued to support the Academy but placed less emphasis on importing foreign scientists. Peter III was overthrown by his wife, later known as Catherine the Great, in 1762. Catherine, a German-born princess, had a strong interest in Empire and the future of the Academy. It is not surprising that she encouraged more German scientists such as Peter Simon Pallas to further the Academy’s work.